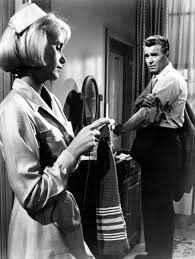 36 Hours is a riveting spy thriller from 1964 starting James Garner, Tod Taylor and Eva Marie Saint. Garner plays an American major captured by the Germans in World War 2 not long before D-Day. He is drugged and taken to a fake military hospital. He is made to age artificially so that when he wakes up he thinks that give years have passed, that the wat is over and that Americans won. It is a fascinating film. I don’t think that’s it’s implausible that this could happen.

The idea behind this whole ruse is to get the major to spill the beans about where the Allied troops were going to land in France. The major did know this and the Germans knew he knew this. The seemingly friendly doctor is played by Rod Taylor whose job it is to tactfully get the information from his patient who in actuality was his captive without the major catching on. I won’t reveal anymore information on the film. With a tight script and excellent performances all around you can’t go wrong.

The cast even includes the lovable Austrian film and television actor John Banner who played Sgt. Schultz from Hogan’s Heroes which is still one of my favourite tv shows after discovering them on reruns when I was a child.