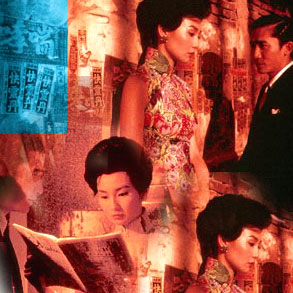 The graceful silhouette of a woman comes into view. Away from the darkness, she is revealed in a figure-hugging, beautifully crafted cheongsam or qípáo dress. Poised and graceful, with her hair always meticulously coiffed, she looks exquisite as she glides through the interior surroundings, whether a winding alleyway, a cramped restaurant or narrow stairwell.

It is 1960’s Hong Kong, a man and a woman move into adjacent apartments with their respective spouses only to discover that their ever-absent spouses are involved in an affair. Tied to their traditions, a complex bond emerges as they cope with their sadness.

The film is called In the Mood for Love (2000) and stars Maggie Cheung and Tony Chiu Wai Leung. It is director Wong Kar Wai’s biggest hit, garnering him multiple Best Foreign Film Awards. It is a beautiful film, a visual treat for the eyes. The director paints us a journey with this enchanting exploration of unrequited love, silent passion and loss to the haunting, recurring refrain of Mike Galasso and Shigeru Umebayashi’s Yumeji’s Theme.

The director has made it clear that the film is not so much about an affair between two neighbours, saying that it is far more interested in social etiquette and tendencies than such obtuse topics as cheating.

The stunning art direction in this film was remarkably managed by Christopher Doyle, the cinematographer and William Chang Suk-ping who is credited with the production and costume design, and make-up.  The remarkable shots in this film are grand master strokes, beautiful paintings created by the director himself, in rich, sumptuous colours and tangible textures.

Wong Kar Wai creates for us an atmosphere with the use of light, music, colour and space. There is a melancholic, dream-like quality that creates a nostalgic atmosphere about the film and it is pure enchantment to watch. Waves of emotion are suggested without the use of words. Such a sensitive film with understated qualities is rare. I am reminded old Hollywood in scenes throughout, an evocative yet restrained sensuality as the two share nothing more than furtive glances, coy smiles and quiet conversations, with only the use of facial expressions to imply changes in mood or communication.

The costumes are exquisite, I am enchanted by the beautiful qípáo dresses Ms. Cheung wears. There were 46 dresses made in all, not all made the final cut. Ms. Cheung wears a total of 20-25 dresses for the whole film. The dresses play a very important role in the film. The dresses are beautiful and elegant and throughout the film they appear to be undaunted by the emotional strife beneath the impeccable façade.  They also work as visual companions to the painstakingly and beautifully assembled sets and interiors.