We went shopping for some of these classic dvds recently, I was desperate to see a great film, and specifically one of my favourites … I recall vividly the first time I saw Casablanca on screen. I was 10 years old, there was nothing else that interested me on tv and no one to play with outside. I saw this black and white film about to start, it looked like it was going to be boring and the picture quality was terrible … It actually didn’t take me long to get hooked, less than 2 minutes.

The three leads outside Rick’s Cafe.

Casablanca was my introduction to Humphrey Bogart, Ingrid Bergman, Paul Henreid, Dooley Wilson, Claude Rains, Peter Lorre, Conrad Veidt, Sydney Greenstreet, S. Z. Sakall and the wonderful actors who make up the rest of the talented cast of this very special film. Casting did a superb job hiring everyone from the leads to the supporting actors. I even read somewhere that the extras singing in the powerful La Marsellaise scene were actual former French refugees which lent real authenticity to the film’s message.

It was also my introduction to filmmaking and what could result with just the right ingredients, great writing, superb direction, awe-inspiring acting, a haunting theme song … cinema magic, who needed special effects.

Humphrey Bogart in a scene with the ever-lovable actor, S. Z. Sakall.

From some of the greatest lines ever spoken on film, to the best acting and scene-stealing actors, Casablanca has it all.

Over the years I become so familiar with the film that I can quote most of the actors word per word. I think I can do a pretty mean Peter Lorre! 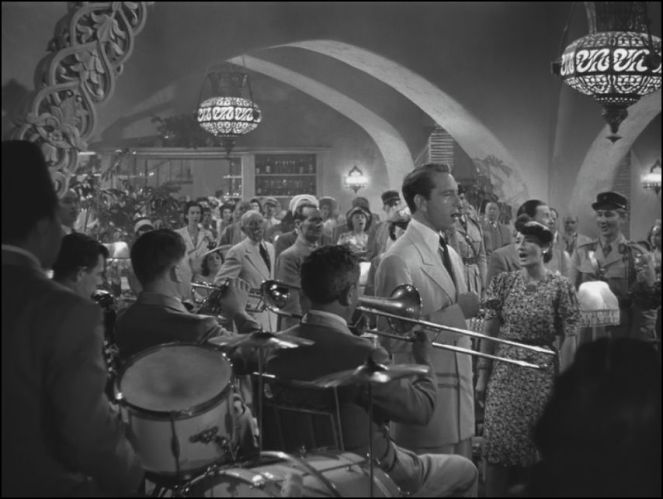 Paul Henreid led the chorus of singers in this very powerful scene from the film.

Rest in peace, Madeleine LeBeau who passed away on May 1, 2016. She was the last surviving member of the cast of Casablanca.

I recall the La Marseillaise scene which still stirs something in me whenever I hear it. This powerful scene marks a turning point in the film. After all those years with my French teacher, I had to know the French lyrics by hard. Thank you, Mlle. M. Vive la démocratie!!

I would hate to spoil it for anyone who has actually never seen this film and there are a few out there, so no spoilers here. Can a film actually be perfect in every way? I think Casablanca pretty much succeeds here. We’ve had to sit through some pretty bad films recently, I couldn’t believe people paid to make some of this junk and that we actually paid to see it. Someone told us that the last film we saw which shall remain nameless, was great. Like Bogie’s Rick, we were misinformed. 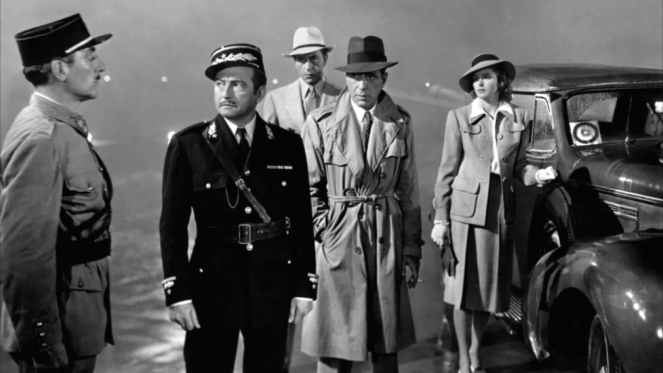 Casablanca is one of Hollywood’s greatest romances, if not its greatest. It’s difficult to even use a specific genre for this film, it’s a romance and yet it’s a drama, it’s a murder-mystery/suspense. Think of all the funny lines that came out of this film. There’s so much to this film that it just has to be seen to be believed. It’s hard to believe that despite the many writers involved in its conception, the tension between the director and at least one of the writers, the numerous rewrites involved, the callbacks some of the actors had to make even after finishing the film, what came out was a wonderfully unified and consistent script, according to Roger Ebert. Michael Curtiz’s direction of Casablanca is perfection. Just like one of the lines in the film, “You will not find a treasure like this in all of Morocco.” Casablanca won Best Outstanding Motion Picture, Best Writing/Screenplay and Best Director in 1942.

2 thoughts on “We’ll always have Casablanca and La Marsellaise”